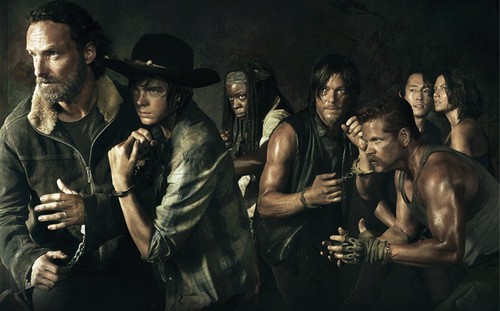 This season has been really exciting. We’ve gotten introduced to some new characters and some old favorites have evolved and are going through changes as we speak, but one thing that hasn’t happened yet is a really significant death. Sure last season we lost Beth, Tyreese, and Bob. While I enjoyed all those characters and were sad to see them go, none of them had quite the impact as Hershel, Lori, or Shane. I think we are due for something big and with Negan looming, I’m almost certain we are in for some heartbreak. I want to discuss the 4 most likely candidates (in my opinion) to be killed off at the end of the season.

I honestly don’t think Glenn is going to die at the end of the season. Mostly because I don’t know if I could handle it. If he did it would be a cruel, cruel gesture. We’ve had enough scares with him over the course of this series, certainly this season, and I don’t think we are going to see his end just yet. He will live to see is baby at the very least. Though I wouldn’t be surprised if we get a close call before the end of this season. There is comic precedent for Glenn’s fate to be in question at this point in time but going that route would be far too obvious and predictable.

Reason he could die: Don’t kill me for suggesting this. I’ll have you know, this is number 4 because I think it’s the least likely to happen. I think that the introduction of Jesus speaks volumes. I get a weird feeling that Jesus could slide into a void that Darryl’s absence would create. He’s not gruff, but he is a badass in his own right. If there was a character to transition into a post Darryl Dixon era on the show, it’s got to be Jesus.

Why it would be significant: It’s Darryl. Everyone loves Darryl. He is the heart of this show. He went from hated to loved and he has always come through in every sense of the phrase. He’s been around since season 1 and has a connection with so many of our primary cast members. At this point in the series I couldn’t think of a more significant person to lose than him.

Why it won’t happen: It’s Darryl. Everyone loves Darryl.

Reason he could die: They are doing a lot more with him than they have done in the past. He’s part of a love triangle and he seems to have found a new reason to live in his budding relationship with Sasha. Hint Abraham, never have a reason to live. It means you are doomed.

Why it would be significant: He’s a strong character who provides some serious muscle. A loss of this caliber, while not being as impactful as some other characters would be a significant loss from a strength perspective

Why it won’t happen: He’s still a fairly new character with some issues that could still be mined for story purposes. He’s been a major source of comic relief and it’s an element this show needs. Also as mentioned earlier, it wouldn’t be a huge loss to the group and I expecting something big to happen. Abraham just isn’t big enough.

Reason he could die: I see his role this season, like Merle’s in season 3. He came back for a season, completed an arc, then died in epic and heart-wrenching fashion. He’s been the peacemaker, the one to fight against causing more death through acts of violence on other living people. The unwillingness to take life makes you somewhat vulnerable. I imagine the Negan doesn’t share an ounce of Morgan’s opinion and wouldn’t hesitate to kill Morgan for no real reason at all. The fact that he wouldn’t fight to the death with anyone (at least currently) makes those who have no limits much more of a danger to him.

Why it would be significant: Despite the fact that he is one of my favorite characters ever in this series. He was the man that introduced (and Rick) to the world of the Walking Dead in the very first episode. Rick and Morgan have a special connection because of their initial meeting. Morgan’s death would impact Rick more than anyone really. Rick has wanted Morgan with him from the beginning. He wanted Morgan to join him when he was looking for Lori and Carl. He wanted to bring Morgan back to the prison and now that Morgan is back in his life and they stand on different ends of the spectrum their relationship seems a bit rocky. Even though Rick hasn’t agreed with Morgan he has still been very respectful of his viewpoint. More respectful than I ever would have expected. If Rick loses Morgan, I think Rick will feel like he failed, and Rick does not take losses like that very easy (ei Lori).

Why it won’t happen: I could very realistically see an end to this season in which we see Morgan’s “way” win out. The group has gotten to a point where they could be perceived as villains. Morgan’s means don’t jibe with that. I also think that there is A LOT more they could do with his character in subsequent seasons. He and Rick haven’t had the kind of heart to heart talk I would have expected by this point. Without that, Morgan’s death would be a lot less meaningful.

Reason she could die: Carol is going through a crisis of conscience right now. I get the sense that this is their way of wrapping up her arc. She has undergone one of the more drastic character changes on the show. She went from a quiet, emotionally weak, physically unassuming person to a complete and utter warrior who shows little to no emotion… well until recently. She’s still a brilliant tactician and chameleon but you can see that her impenetrable outer shell is breaking. Morgan’s influence is getting to her and it’s causing her to question her past choices to take lives. This shows she is coming full circle and she’s almost rounded the bend. She certainly isn’t completely going back to who she was, but her ability to just do what needs to be done is diminishing. She natural (and good) emotion is overriding her killer instinct. Seeing how much she cared for Maggie and wanted her to protect her shows that emotion is creeping into her thought process. All the emphasis that has been placed on this and all the care that is going into highlighting her character in a very intriguing way has me pretty concerned. I think if she does die it will be sacrificing herself for the group because that is the completion of her character. That final act really shows how deeply she cares for these people and how she will do what it takes to protect them, merging her emotional awareness with her strength.

Why it would be significant: Carol has been a fan favorite since her one woman destruction of Terminus. She went from outcast to hero. While I personally have had complicated feelings about some of Carol’s choices her role in the group is vital. Her relationship with Darryl started in Season 2 and has grown into a sincere friendship, though as of late it seems to be more Darryl being friends with her than she with him (or anyone really). Other than Darryl she is probably had the most clear change of character and that growth has been interesting to witness. She has really been a guardian angel for our group and in terms of the safety of the group she is someone that at her best or worst they can’t afford to lose. Carol has been with us since Season one. The thought of losing someone we have known and seen grow so significantly and for so long would be incredibly powerful.

Why it won’t happen: This is why Carol is number one. I have a hard time coming up with how this can’t happen by the finale. There is too much writing on the wall, especially in the most recent episode “The Same Boat”. I could see Carol finding a balance between being a warrior and limiting her acts of violence through more conversations with Morgan and then that sending her down another path. The thing is, I have no idea were Carol could go from here, without her just fading into the background of the show. And if Carol has proven anything, she is beyond fading.