I’ve never been the biggest Carol proponent, but what an fantastic episode for her character. Every moment with her was pitch perfect and had me feeling all kinds of feels.

We’ve gotten more than used to “badass Carol” for the last couple seasons now. This time we saw her at her most vulnerable since she saw Sophia as a walker. I’ve gotten so used to this hardened version of her that we she began to hyperventilate, I was completely convinced it was an act. The brilliance of this episode was that as it went on I began to feel different. I kept expecting Carol to do something shocking and calculated but it never really happened. You could see that her fear, and emotion we no longer associated with Carol, was absolutely real and she was feeling every ounce of it. These people who kidnapped them were the kind of people Carol could dispatch in her sleep, but in her more vulnerable state, she was more susceptible to  them and their tactics. I could see this episode of panic as Carol having just pushed all these other moments back in her mind. Moments where she should have been scared but didn’t appear that way. All the things she had done, everything she had witnessed that she had suppressed came back at this very inopportune time. Thankfully Maggie was their to shake her out of it a bit. Maggie was the aggressor in this episode. I think there was a part of her that knew she had to be because she either thought she needed to play along with Carol’s ruse or she really saw the Carol was cracking and needed to fill that role. Carol still struggled to shake her emotions off, but when it came to surviving, she did what she needed to do to protect herself, and maybe more important to her at this point, Maggie and the baby. 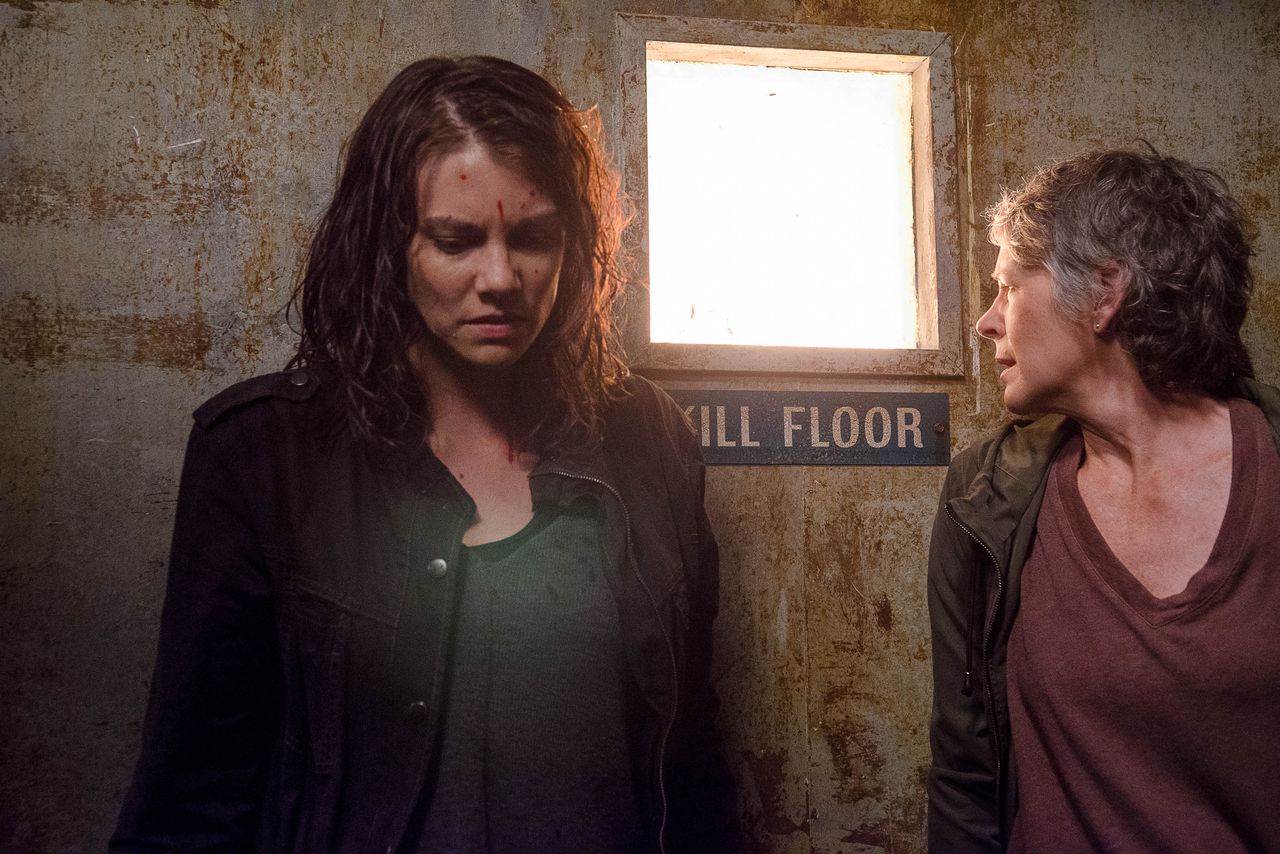 This episode continues to beg the question that really started two episodes ago, is our group turning into the villains? My answer, no. Some of this answer is impacted by the fact that I’m pretty certain Negan is going to be the worst villain this show has ever seen, making many of their actions at this point justifiable. This isn’t to say that the group’s actions (such as leading some men into a chamber only to burn them to death when they haven’t lifted a finger to harm you), aren’t wrong but I think the perception of those actions, and the attack on the compound are going to be seen as needed. Besides, we’ve gotten a dose of Negan’s group when they encountered Darryl, Sasha, and Abraham on the road. They are bad guys who were immediately aggressive and ready to kill without our heroes doing anything but passing through on their way home.

The kidnappers in this episode, particular Paula were fantastic. I disliked them immediately. As terrible as it sounds, I enjoy when the show tries to humanize a character but it doesn’t make me feel any different about him or her. I didn’t care that Paula had a family, and a terrible boss. It’s no excuse to take out your frustration on people in such as violent way. I’m sure Maggie and Carol aren’t the first people they have encountered and treated like this.

For an episode that took place in a very isolated and bare location with lots of dialogue, I was impressed about how glued to screen I was. If you described this episode to me without seeing it, I think I would scoff at it (but still watch it of course). This episode thrived off of great performances that made this episode a relatively quiet thrill that I really enjoyed.