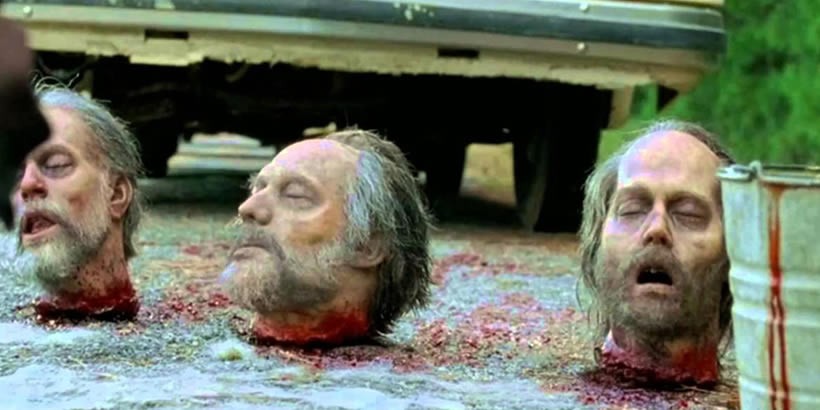 This episode was intense, controversial, and emotional. In other words, everything this show is at it’s best. That isn’t to say that this is an all time great episode, but it did have some fantastic elements that made it a very good one.

The assault on Negan’s compound was one for the ages, for several reasons. It was emotionally and physically brutal. Glenn was the focal point of much of this, as we had to witness his first human kill. Glenn’s one of the few characters to keep his innocence intact. We almost saw Glenn take a life last season with Nicholas, but he couldn’t bring himself to do it. As traumatic as it had to have been for Glenn to take a life I don’t think it changes his character all that much, if anything the moment were he spares Heath from having to take a life just reinforces how strong and heroic a character he is. Maybe it’s the baby that makes Glenn feel the need to go through with it. It’s no longer just he and his wife, they have a child to provide for now. If Glenn has proven anything, he will do EVERYTHING he needs to in order to protect those he cares about.

We certainly are starting to see Carol crack a bit. We get to see her keeping a running tally of the lives she has taken. It was pretty interesting to see who Carol felt responsible for and that it was something that was weighing so much on her conscience.Seeing how she responds to a pregnant Maggie being on this mission is really indicative of her changing attitude, not to mention this is a perfect way for her to stay out of the fighting. She’s angry and upset that Maggie is there at all. She knows Maggie is competent and can hold her own, but I think the idea that she is with child leads Carol to think she is putting that child in danger, which I completely agree with. Before, I think Carol would have not have even raised the question. Morgan’s value of all life is hitting Carol hard right now.

The entire plan to assault the compound, while entertaining and thrilling was a very risky move by the group. While they were precise and executed their plan very well for the most part, going into that situation with very limited knowledge was a bit foolish. They aren’t sure if they got Negan, they don’t know how many compounds are out there, and they don’t know how large of a network Negan has. Clearly this assault was not as easy as it looked and their are going to be some serious consequences for rushing into this fight so quickly. I know food and supplies are necessary for survival, but they needed to take more time to prepare for the attack. Of course, if they did, we wouldn’t have a show so I can ignore this detail. The real controversy in the episodes comes from the murder of these sleeping people. Were they are terrible as the Hilltop said? After all, they did nothing to Rick’s group, why per-emptively attack? I have no clear answer for this. I don’t know if it was right or wrong. What I do know is I saw those photos they took, of humans they had massacred. If their was any proof or justification for how violent and dangerous these people were, that was it. That helped to quell my reservations about a preemptive strike. I like that we get a few different lens to look at this choice through as well. Rick, who sees it as an absolute necessity for their survival, Morgan who wants to develop and alternate plan where no one has to die, Carol who is struggling with taking lives so she finds herself an out, and Glenn who is struggling, but takes lives for the first time. Rick is the only one sure of his decision and I find that endlessly fascinating.